A Tribute to George Atiyeh 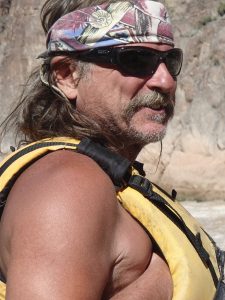 The conservation community lost a true hero in the Beachie Creek fire near Oregon’s Opal Creek Wilderness. As young child George Atiyeh climbed up into the magnificent old growth trees of Opal Creek and pledged his soul to defend them and the land on which they stand. Saving ancient forests in Oregon in the 1970s, 80s and 90s took whole-hearted commitment and savvy. George stood at the gates of Jawbone Flats – a piece of property his family mined and eventually owned – and refused to let logging trucks through to his beloved Opal Creek. With human barricades, public outcry, testimony to Congress, and once even guns, he said “No. You’re not getting these trees.” George eventually persuaded Congress to declare his sacred groves permanently protected Wilderness. He was their guardian until his dying day.

In 1988, Terry Tempest Williams wrote a piece called “Coyote” that eloquently captures George’s spirit and character more perfectly than we can. With her permission, we include in our tribute this portrayal of a wily, playful, and unwavering defender of the wondrous forests of Opal Creek.

He is profane and he is sacred, a bumbler and a hero. He straddles the canyon walls with wild oats in his belly. And the Navaho know him by name- Ma’ii, the one never to be taken for granted. They understand his fickle nature, how he seduces fools into believing their own myths, that they matter to the life of the desert.

Coyote knows we do not matter. He knows rocks care nothing for those who wander through them: and yet he also knows that those same individuals who care for the rocks will find openings- large openings- that become passageways into the unseen world, where music is heard through doves’ wings and wisdom is gleaned from the tails of lizards. Coyote is always nearby, but remains hidden. He is an ally because he cares enough to stay wary. He teaches us how to stay alive.

Members of the Clan are not easily identified, but there are clues. You can see it in their eyes. They are joyful and they are fierce. They can cry louder and laugh harder than anyone on the planet. And they have enormous range.

The Coyote Clan is a raucous bunch: they have drunk from desert potholes and belched forth toads. They tell stories with such virtuosity that you’ll swear you have been in the presence of preachers.

The Coyote Clan is also serene. They can float on their backs down the length of any river or lose entire afternoons in the contemplation of stone.

Members of the Clan court risk and will dance on slick rock as flash floods erode the ground beneath their feet. It doesn’t matter. The understand the earth re-creates itself day after day.