WELC works with a broad coalition of advocates toward the goal Reducing Methane Pollution on Public Lands. 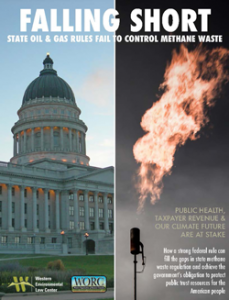 END_OF_DOCUMENT_TOKEN_TO_BE_REPLACED

A broad coalition of conservation and citizens’ groups sued the Trump administration late Friday to challenge the Bureau of Land Management for rescinding most provisions of its 2016 methane waste rule. The lawsuit, filed in U.S. District Court, notes Interior...

END_OF_DOCUMENT_TOKEN_TO_BE_REPLACED

Today the Bureau of Land Management pre-published a rule rescinding most provisions of its 2016 methane waste rule. The original rule required oil and gas companies operating on public lands to take reasonable measures to prevent the waste of publicly owned natural...